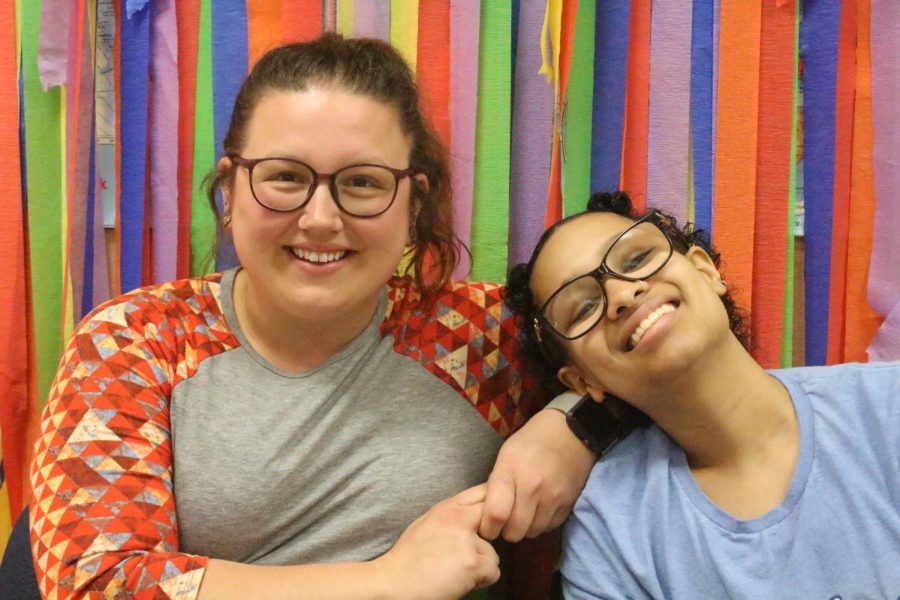 Senior Imahnie Perez and her para Candace Cooper discuss their relationship and how they have grown together.

How a Friendship is Made: The Story of Imahnie and Candace

It’s 8:20 A.M. and Candace Cooper is waiting outside of the high school. As the van pulls up to the curb, she walks around to the back, pulling out a wheelchair before helping Imahnie Perez out of the passenger seat. The pair heads into the building, marking the official start of their day. As they move from class to class, Cooper never leaves Imahnie’s side. They work together on assignments and activities, with Cooper helping her to learn and work at a suitable pace.

This is how each and every day since August has gone for Perez and Cooper.

“It was like making a new friendship, [and now] we kind of live in our own quiet little world.”

In the fall of 2017, during her junior year of high school, Perez was diagnosed with Medulloblastoma, a form of brain cancer. She had been suffering from regular headaches and had taken a trip to the emergency room as a result. While there, they took scans of her head and later concluded from tests and x-rays that she had cancer. This essentially marked the end of her high school career for the next year.

In the wake of the diagnosis, Perez’s family was met with unexpected and expensive medical costs from multiple treatments and surgeries, leading to community-wide outreach in support. T-shirts were made, GoFundMe’s were started, and games were played in her honor. At that point, “#ImahnieStrong” was all Candace Cooper knew about her.

“It was like making a new friendship,” Cooper said of her initial interactions with Perez, “[and now] we kind of live in our own quiet little world.”

This isn’t Cooper’s first experience working as a paraprofessional, nor working one-on-one with students. She began working at USD 475 when she was 19 years old, nearly seven years ago.

“I worked in a one-to-one setting once before at the Chapman School District, and it was terrible. But, starting this school year, we had a good idea of what we were getting ourselves into,” she said.

Originally, Cooper was not one of the paras working with Perez, outside of transporting her from Chemistry class. Eventually, though, Kate Harmison, Junction City High School’s Special Education Coordinator, suggested the pair work together, and they just ‘clicked.’

“I complain about work a lot less,” Cooper said of how her life has changed since working with Perez. “I get to spend all day working with someone I actually like.”

Cooper has been able to provide emotional support for Perez when she feels like no one else is there for her. Perez appreciates Cooper’s honesty and the fact that she never looks at her with pity.

“I would say I was pretty smart and independent earlier in my life, but now, since I had cancer, I’m usually with Ms. Candace—like ninety-percent of the time,” Perez said.

With graduation fast approaching, Perez is looking toward her goal to become a Forensic Pathologist.

“Honestly, I want to go to college…but I told my mom if I wasn’t better and have to wear a chair, I would probably take a semester or year off of college,” Perez said.

With determination, Perez is taking steps to regain her independence.

With Cooper helping Perez regain her confidence and independence, graduation will be a special moment for both of them.

“I’m going to cry like a baby,” Cooper said, “I’m definitely going to be emotional.”