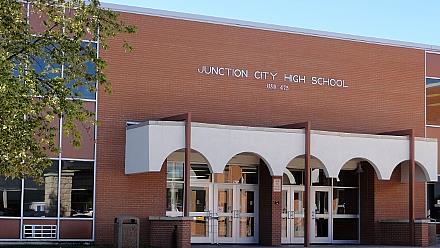 As of January 7th, Junction City High School has enacted the closed lunch policy. People had mixed opinions about lunch being closed to those who don’t have their permission slips signed by parents or guardians. This policy has been placed to help adjust the high school students to the new building, in which it won’t have open lunch. To accommodate the abundance of students now in the building for lunch they’ve opened Fiffe gym and put tables inside to give more seating options for people.

They’ve added a cantine to lunch so students have more options available. They can get things such as salads, sandwich wraps, instead of what the normal lunch line is serving. People had mixed opinions. It begs the question, how do you feel about closed lunch?

“Awful, the worst decision the district has ever made. They expect these children to be on lockdown when half go off campus for lunch because they can’t afford school lunch,” said senior Chance Lewis.

“Honestly, it’s kind of weird and I think there should be an option to go to the library or do something fun because it just feels like going back to middle school where you could barely go anywhere during lunch,” said senior Mariana Rodriguez.

“It doesn’t affect me too much since I can’t drive, but it sucks that I can’t ride with a friend anymore to get lunch or even eat outside if I wanted to,” said junior Neptali Vessichelli.

Some teachers, such as AV teacher Lisa Lawhorn, are indifferent and in the middle when it comes to the closed lunch policy

“I honestly think that it is safer for some students because some students like to break the rules and leave when they shouldn’t leave. So I definitely think that it protects the school from legality issues but I also feel like it’s taking away some of the freedom from the students who actually do earn it and who do deserve to have open lunch so I feel like honestly, it’s a catch-22; it’s got pros and cons on both sides. As I said, it provides a lot of safety as far as legality issues go for the school, keeping the kids safe, keeping them from getting in wrecks and things like that or skipping. You know, as I said, those students who actually deserve open lunch and do good in school, they’re getting that privilege taken away from them that they earn and have been looking forward to since they were freshmen.”

As every decision does, this situation has pros and cons. Pros are legal issues and situations. Cons are restricting the freedom the upperclassmen have become accustomed to. This was implemented to lower legality issues and to prepare students for the new school in which students won’t be able to leave school for lunch at all. The new school is planned to be finished and opened in August of 2021.