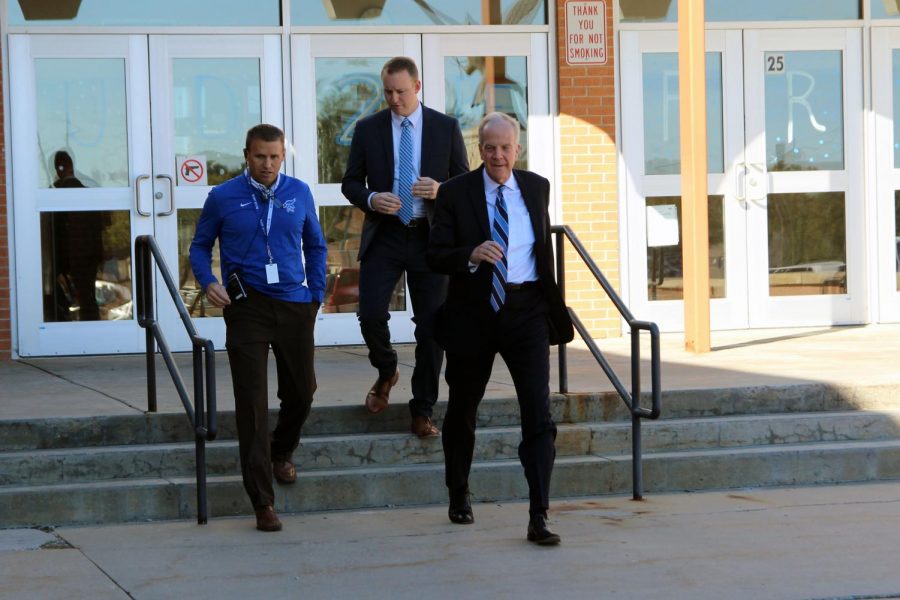 Sen. Moran serves on a committee that appropriates money for the U.S. Department of Education, and says that Junction City is a community that they care a lot about.

Three Student to Student (S2S) club members, Corbin Sanner, Joel Nieves, and Sierra Garner gave Sen. Moran his tour. Moran was very engaged with these students, and was thorough in his questions regarding both their favorite and least favorite aspects of the current building.

During his campus tour, Sen. Moran visited one of the personalized learning classes taught by social studies teacher Joseph Rix. Sen. Moran spoke highly of these newly piloted classes, saying Junction City High School is the only school he has seen take this route in regards to education redesign.

“School may now be reflecting what it looks like when you’re trying to make a living,” Moran said about personalized learning.

Additionally, Moran was impressed by the abundant hands-on experience offered to students at JCHS through the internship program as well as some of the engineering-based classes (i.e. Automotive Technology and Welding).

Sen. Moran expressed a special interest in JCHS and the new building, saying that the impact Fort Riley has on the Junction City community is imperative in assuring that soldiers and their families are well cared for.

The committee that Sen. Moran serves on made it possible for USD 475 to receive Heavy Impact Aid, estimated to cover approximately 60 percent of construction costs for the new building.

JCHS is not the only school to benefit from the work of Sen. Moran. He announced in August that funding has been approved for the construction of a new elementary school on Fort Riley, as well as renovations for an older one. This new primary school will be replacing Jefferson Elementary.

Sen. Moran visits schools in order to see how education reforms and changes may effect children and teens.

“The consequences of the decisions I make will impact people who are younger, who I don’t spend as much time with,” Moran said. “Schools give me a chance to talk to students and try to figure out what’s going on in their lives to see if there’s ways I can be of help.”